Doctor Mog (over at daevaofwar.net), put together this handy guide for new FFXIV players: 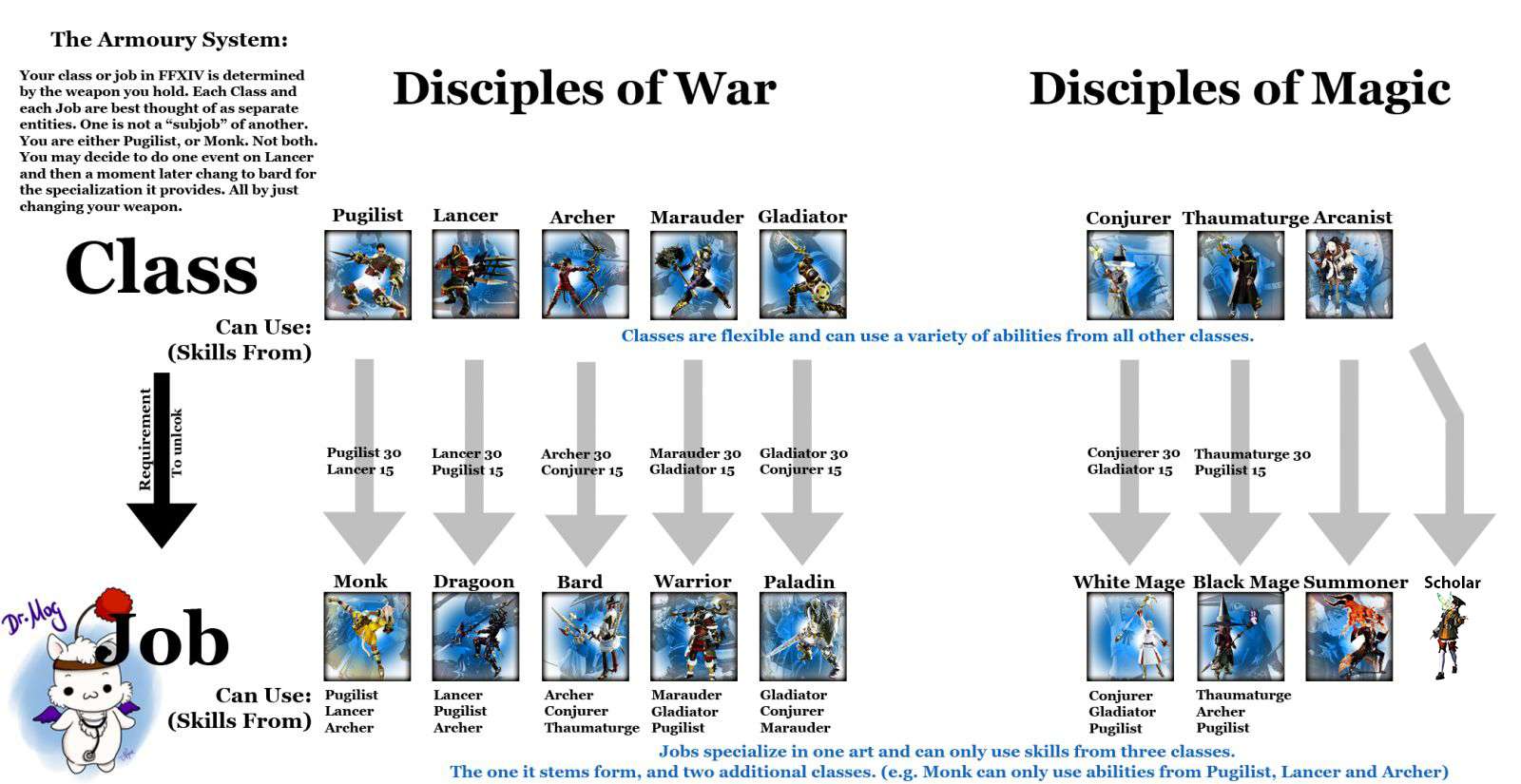 More details will be coming later for Scholar/Summoner (their requirements & allowed skills are not yet public knowledge).

**Dr. Mog has not updated this image with current information as of this edit, so I have created my own here, and will keep it up to date as info becomes available.**

Question and reply do Example.

I have Monk skills as prim but I can?, also use Lancer,Archer ( Skills ) at the same time or one of those and how does the system let you choose which one.

How does armor work then?   If say I was in one group as thier "Tank" while using my Paladin weapons, and the next group needs a "Healer" so I switch to White Mage weapons,  should I also swap out my Plate for some Robes like in the class pictures?   Will we have enough inventory space to maintain flexibility, or should we concentrate on just one or two jobs?

Looking at that charrt I was wondering if leveling all the classes and jobs on one character was going to be a thing folks aimed for, as opposed to alts.

In regards to both of your questions: Sorry for the smelly *.jpg pics. Not paying ImageShack for the privilege of posting *.png! :P

Hope that answers your questions. ^_^

Thank you very much.

Great guide, but the inline images are huge, I can only see just over half on a 1680x1050 monitor.  I'm trying to figure out how to set the images to dynamically resize to the viewing browser, but so far unable.  Maybe Fog knows.

Sekkerhund: Yeah, I was trying to avoid compression so that the game and UI elements would not lose too much clarity (which already occured a bit by converting them to *.jpg in the interest of hosting size).

It's not so much a problem when I tested it on my phone (yay, pinch & zoom!), but I can understand the slight annoyance of having to scroll around a bit on your desktop/laptop.

I spent an hour or two trying to wrap my head around the posting GUI flexibility offered here (as well as experimenting with the source code), and the best I could come up with (without breaking the image links outright), was something like this: Both of which require an additional click(s), on top of redirecting you, if you want to see things clearly. I decided that if it came down to having to make additional clicks versus mouse scrolling, that scrolling was the less annoying of the choices.

If you go to this link, you can see that it resizes just fine (and even has a zoom function to view the image in its original resolution). I'm just not experienced enough with the Gaiscioch forums to mimic that functionality.

If you figure out how to have them dynamically resize before I do, by all means let me know! I'll try to remember to ask Ben the next time I have a chance. Until then, I'm going to leave them as is. Apologies for the slight annoyance! ^_^;

Where did you get that hatchling?!!!

they're sold from vendors in the main towns =)

Each city should have a vendor that sells them. Unfortunately, I don't think I have any screenshots of the vendor locations.

I've purchased minions from both Gridania and Ul'dah, so I would imagine they are also available at Limsa Lominsa.

They cost around 2400gil if I remember correctly.

I can describe the locations for you at least.

Screenshots below, with map locations! Meh, you can make do viewing it if you just scroll sideways.  It does not look like we can size it down and retain the ability to see the text and detail. Thanks for the effort you put into that!

Added the 101 video to thread

I dont understand the reason a White Mage gets access to only Conjurer, Gladiator and Pugilist skills. I haven't seen any skills from those classes except maybe the +20% crit buff that lasts like 10 seconds from pugilist.

White mage should draw from other Disciples of Magic classes, THM has more than one useful ability...

I look at that chart and all i see are Black & White mages getting screwed with class abilities they can or can't use.

I like having the option to play a class at 50, in addition to playing a job at 50.  Since job skills are more specialized I think it makes sense to limit the skills you can borrow from other classes.

I agree Pugilist for WHM is a little surprising.  Maybe that's just a placeholder until Arcanist comes in?

Pugilist and Gladiator getting access to a Conj is all around great! protect...cure, Esuna, Raise, Stoneskin. The white mage gets nothing from the gladiator or pugilist. The jobs should borrow from the classes that make sense. Paladin & bard should totally borrow from Conj, but why should the Conj borrow from two complete melee classes. I've looked at the skill list, theres nothing of use.

Conj, THM and Arcanist should all borrow from each other.

Look at the warrior and paladin jobs. Warrior borrows from marauder gladiator pugilist (slow on evade ftw), Paladin borrows from gladiator marauder and conjuror. Win-Win for both jobs. They each get access to the other class that shares their role in a group and one other useful class...one can slow with evasion skills, the other can defensively buff with raise and heals. Keep in mind...both tank jobs have access to every tank class skill in the game. WHM and THM literally gets nothing out of the deal.

I like GLD's convalescence.  I think it will be great at endgame for keeping yourself alive while saving dps from poo!

Agree with your points though...I guess we shall have to wait and see whether they change it once ARC is released.

This was a very good and helpful post to this noob who will be playing the last wee bit of phase 3.  We shall see how confuzzled I get and I assure you it isn't hard for that to happen at times no matter how much of a geek I am!

Don't mess with Mama Bear, I might hug you too tight. =D
Awards & Achievements

So, about those skills you can borrow from other classes.  Here's a spreadsheet that shows who can borrow what.

That spreadsheet is not even close to correct.

According to that spreadsheet White Mage, which is what i'm familiar with. Does not get access to Gladiator or Pugilist abilties at all and instead gets only THM abilities. While I would love for this to be the case. All evidence I have seen points to this being 100% wrong.

Maybe not 100% wrong, since the Archer ones look right.  The source is from the beginning of phase 3, about 3 weeks ago:  http://www.reddit.com/r/ffxiv/comments/1gg13g/ive_created_a_spreadsheet_showing_skills_shared/.

I'd planned to make my own spreadsheet during phase 4 until I saw this.  I guess I'll go back to Plan A!

I did some research on the issue and found this which is dated about 3 weeks ago: http://ffxivrealm.com/guides/job-class-system-explained.6/

Apparently the chart shown in the very top picture was based on 1.0 shard class skills. They have changed according to this article to this:

The following is a list of the current jobs. Text in bold indicates the base class, italics indicate the available cross class skills and (Lv. X) indicates what level is needed to unlock the quest to obtain the job.

Note, the Lv. 15 class requirements to unlock jobs are not yet known. At least some available cross-class skill sets have changed from 1.0. Anything with a question mark after it is unconfirmed as of phase 3 of the ARR beta.

There is so much info out there I am finding it difficult to work out what is correct and what is not....sigh!  I want all the things I like to be correct and all the dumb stuff to be lies!!

I would really like it to be correct, that list makes sense! Sadly that doesn't make it so...but I will hope!

I'm getting all the 30/15 stuff for the jobs, but I wanted to be sure on something: you can take every class to the level cap no matter what, right?

I love the illustrated guide but one question.... is there any way you can make the pictures larger? I can barely see them! :D

lol great to have you back Charlatan...oh how I missed that wry wit and understated humour ;)